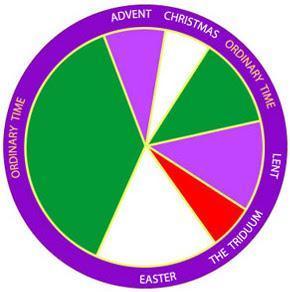 Also called the Church year or the Christian calendar, the Catholic liturgical calendar is the cycle of seasons in the Roman Rite of the Catholic Church. The Church year begins each year with Advent, the season of awaiting Christ’s coming, and ends with the final Saturday of Ordinary time. Within the standard calendar year, the Church year starts in early December (or sometimes the end of November) and goes through the following November. The Church year consists of six liturgical seasons: Advent, Christmas, Ordinary Time after Epiphany, Lent, Easter, and Ordinary Time after Pentecost. Seasons begin or end based on a movable feast and so some seasons vary in length from year to year, and vary as to the calendar dates. The following is a brief overview of the Catholic liturgical seasons: their durations, their purpose and focus, and the liturgical year colours.

Advent: First Sunday of Advent through to 24th December.

Advent begins the Sunday closest to the feast of St. Andrew, which is November 30th. Therefore Advent always falls sometime between November 28th and December 3rd, and lasts until the Nativity of the Lord. The season always has somewhere between 21 and 28 days. The Advent season is the time of waiting and preparing for the coming of Jesus. This refers both to the anniversary celebration of the Incarnation, as well as the second and final coming for which we are waiting and preparing. The liturgical colours of Advent are Purple and Rose, with Rose being used only on the third Sunday of Advent.

Christmas: December 25th through to The Feast of the Baptism of the Lord.

After the celebration of the Feast of the Baptism of the Lord, Ordinary Time begins. Ordinary does not mean plain. The name comes from “ordinalis” meaning "showing order, denoting an order of succession.” It is used in this sense to refer to the order of the counted weeks. That is to say, it is a season of counted weeks. Ordinary Time after the Baptism focuses on the early life and childhood of Christ, and then on His public ministry. The liturgical colour of Ordinary Time is green; however, as in all seasons, other appropriate colours are worn on particular feast days.

The season of Lent begins with Ash Wednesday and lasts until the final Saturday before Easter, Holy Saturday. Lent is a penitential season. It recalls the 40 days Jesus spent in the desert, and the 40 years the Israelites wandered in the desert. Lent focuses on the events leading up to Christ’s passion, and finally on the Passion itself. Lent is 40 days long. This does not include Sundays, as Sunday is always a day for rejoicing in the Resurrection. Altogether, it covers 46 calendar days, the 40 days plus the six Sundays. The liturgical colours of Lent are violet or purple, traditionally more of a red-violet colour than the deep purple of Advent. Rose may also be used, where it is the custom, on Laetare Sunday (Fourth Sunday during Lent). On Passion Sunday (Palm Sunday) and on Good Friday (which has no Mass but a service remembering Christ’s passion) the colour is red. White or violet is worn on Holy Thursday and Holy Saturday (once again, there is no Mass but there are other services on Holy Saturday).

Easter: Easter Vigil though to Pentecost.

The Easter season begins with the Easter Vigil, which is celebrated after night falls on the evening before Easter Sunday. The season of Easter is a joyous, celebratory season. It begins with celebrating Christ’s resurrection and ends by celebrating the descent of the Holy Spirit upon the Apostles and other followers of Jesus. Christ’s ascension into Heaven is celebrated just prior to Pentecost. The Easter season last 50 days, from Easter Sunday through to Pentecost. The liturgical colours of Easter are white, for most days, and red for Pentecost.